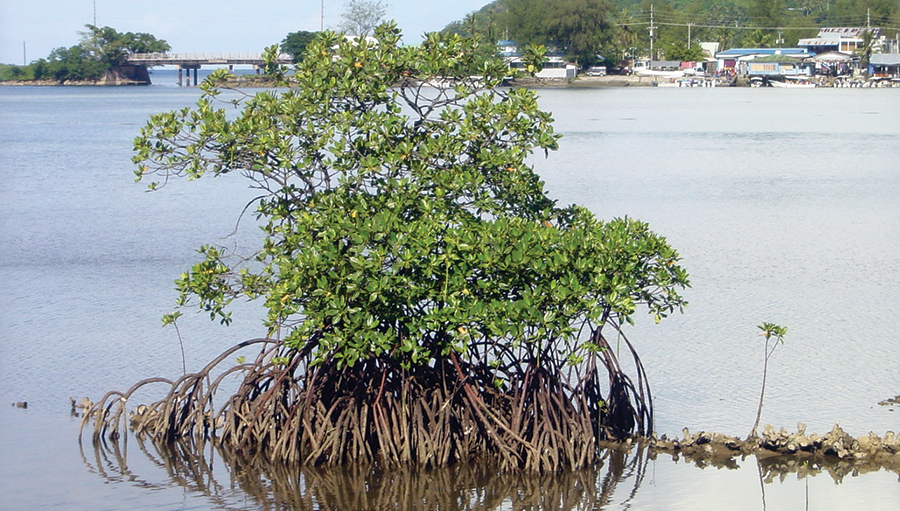 Experts are urging policy makers to preserve mangroves and their essential services to nature and humanity alike, saying their replacement with shrimp farms and other forms of development is a bad economic tradeoff both short and long-term.

An unprecedented partnership of organizations – from forestry and conservation sectors and from across the United Nations – have released a policy brief drawing on the 2nd edition of the World Atlas of Mangroves (2010). It aims to provide managers with lessons learned in past mangrove conservation and management efforts, and with policy recommendations.

Found mostly in the tropics straddling the land and sea, mangroves make up less than half of 1% of forests of all kinds worldwide. Taken together, some 70 species of mangroves are found in 123 tropical and sub-tropical nations and territories but occupy just 152,000 square km in total — an area slightly larger than Nepal.

Yet these so-called “forests of the tide” provide enormous benefits to humanity, especially as essential harbors for biodiversity, as buffers against the destructive power of waves, and as nurseries for coastal and offshore fisheries worldwide.

Since 1980, the world has lost about one-fifth of mangrove forests and many of what remains is degraded, says the new policy brief, “Securing the Future of Mangroves.”

Says lead author Hanneke Van Lavieren of United Nations University: “The benefits of this industry have too often been short lived due to poor planning with ponds being abandoned when pollution or disease take hold, leaving unproductive saline pools and depleted coastal fisheries.”

“Such large-scale conversion has had major negative environmental impacts, including collapses in wild fisheries. In a region where fishing in and around mangroves is a critical activity providing food and income for millions of people, the socio-economic impacts of this conversion have been tremendous,” adds Ms. Van Lavieren, Coastal Zones Programme Officer at UNU’s Canadian-based Institute for Water, Environment and Health (UNU-INWEH).

“There is now a growing awareness of the importance of mangroves and government and community-led efforts are under way to restore or replant mangroves, and to improve legal systems to regulate future use.”

Losses are being driven by a suite of other human threats as well, however, including over-harvesting and deforestation; agricultural, urban and industrial runoff; oil spills; and poorly managed dredging and coastal development.

“These practices continue to take their toll and if left unchecked will cause significant economic and ecological decline,” says Dr. Mark Spalding, Senior Marine Scientist at The Nature Conservancy and co-author of the report.

“Rare and critically important mangrove forests continue to be lost at a rate three to five times higher than that for global forests. Set against this is a growing realisation of the social and economic value of mangroves and a remarkable array of restoration efforts in many countries around the world.”

Climate change will exacerbate existing pressures, the authors add. About 5 to 20% of coastal wetlands (including mangroves) will be lost through sea-level rise by 2080.

In some countries, the extent of loss has been much higher than the regional norm. For example, the UN Food and Agriculture Organization estimates that Pakistan, Honduras, the Democratic Republic of Congo, Vietnam, Sierra Leone and El Salvador each lost more than 40% of their 1980 coverage by 2005.

In Australia, Bangladesh, Cuba, Suriname, and French Guiana, the extent of loss has been kept to less than 1% over the same period.

“The variation between countries can be mostly attributed to national policies and legal protection,” says co-author Zafar Adeel, director of UNU-INWEH.

The report says economic valuations of mangrove ecosystem goods and services provide some of the most powerful arguments for effective mangrove management.

“A growing number of economic valuations are being conducted and most reveal the considerable benefits, even from single services such as fisheries,” says Dr. van Lavieren. “When the full suite of ecosystem services from mangroves can be assessed the arguments for maintaining healthy mangrove forests are usually compelling.”

Specific examples of the economic value of healthy mangroves include prawns harvested in Australia across the wide shallow coastal shelf areas off both the Northern Territories and Queensland — one of the country’s most valuable export fisheries, earning almost US $72 million annually.

One study cited in the policy brief shows that planting and protecting nearly 12,000 hectares of mangroves in Vietnam cost just over US$1 million but saved annual expenditures on dyke maintenance of well over US$7 million.

Meanwhile, the Matang Mangrove Forest Reserve in Malaysia, is cited as arguably the world’s best example of a sustainably-managed mangrove ecosystem. Established in 1902, it covers an area of about 500 square km, approximately 73% of which is considered productive forest while the rest is classified as non-productive or protected.

Only non-destructive forestry, fishing, and aquaculture practices are permitted. Harvesting of mangrove timber for poles, firewood, and charcoal production, occurs on a 30 year rotation cycle. Re-vegetation programmes are implemented two years after the final felling as required. Annual value of the forest products between 2000 and 2009 was estimated at roughly US$ 12.3 million, with cockle aquaculture adding an estimated annual value US$ 10.7 million.

“This case provides evidence that mangrove forests can be conserved and enjoyed while still providing reliable long-term but reasonably high economic return for local and larger communities,” according to Dr. Spalding. “It shows that when well-managed, mangroves can ensure sustainable yields of products.”

The report notes that around Cancún, Mexico, “a mangrove-fringed lagoon was replaced in just a few decades by high rise hotels and some of the most expensive real estate in the country. New coastal roads that were built to provide access to these hotels have cut off the natural hydrological connections between habitats.”

“Without mangroves, coastal erosion is widespread and beaches are continuously being replenished artificially, a very expensive venture. There remains significant pressure from tourism developers and so far, national, regional, and local governments have failed to adequately regulate the fast growing coastal tourism industry.”

“It is clear that integrated and stringent management actions are needed to protect remaining mangroves.”

The report describes instruments and measures readily available to help conserve and manage mangrove ecosystems, and highlights lessons from around the world on successful measures for protecting mangroves.

And it offers recommendations to improve legal and policy frameworks, mangrove management tools, data and information collection, economic incentives to promote more environmentally-responsible behavior and local livelihoods, recognition of the full value of mangrove ecosystem goods and services, including as carbon stores and sinks, and co-ordinated global action under agreements related to biodiversity, wetlands, sustainable development and climate change.

Among the recommendations are several relating mangroves to the climate change issue:

The World Atlas of Mangroves documents over 3,840 square km worth of restoration projects worldwide and “there are doubtless many more,” notes Dr. Spalding, who was lead author of the Atlas.

However, “reversing the trends of mangrove loss and of growing vulnerability of coastal peoples will require a real commitment by governments to develop and implement robust high-level policies,” the report concludes.

“We have a clear understanding of the management interventions required to secure their future. These are underpinned by many successful examples of mangrove management from around the world, and by solid and convincing economic arguments. Trends of mangrove loss can be rapidly slowed with good management practices, laws and the establishment of clear frameworks for mangrove ownership, use and management to underpin human activities. Restoration has also been widely applied in many countries and offers the possibility of reversing the patterns of loss and bringing considerable benefits back to many coastal areas. We hope this policy brief will stimulate greater interest by policy makers in the fate of these valuable ecosystems.”

This policy brief was based on the World Atlas of Mangroves (2010), published by Earthscan as an output of a joint project which was primarily funded by the International Tropical Timber Organization (ITTO) through the Japanese Government, and implemented by the International Society for Mangrove Ecosystems (ISME) since 2005 in collaboration with the Food and Agriculture Organization of the United Nations (FAO), UNEP-World Conservation Monitoring Centre (UNEP-WCMC), UNESCO-Man and Biosphere programme (UNESCO-MAB), UNU-Institute for Water Environment and Health (UNU-INWEH) and The Nature Conservancy (TNC).

Production of the policy brief was funded by UNU-INWEH, UNESCO-MAB and the Spanish Government. It was co-written by Hanneke Van Lavieren, Mark Spalding, Dan Alongi, Mami Kainuma, Miguel Clüsener-Godt, and Zafar Adeel.