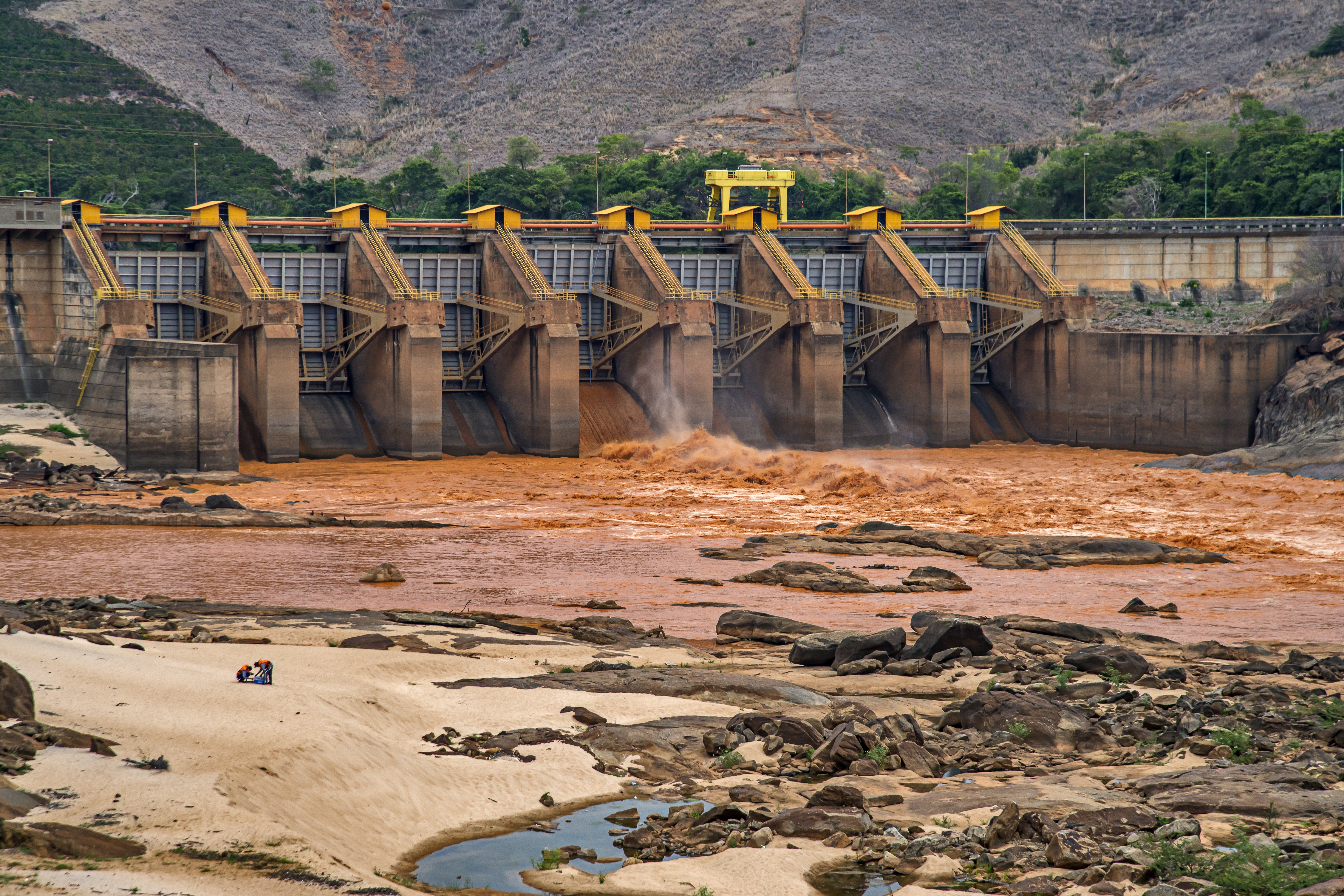 Originally published by UNU-INWEH, 11 January 2023.
Full Journal article: “Present and Future Losses of Storage in Large Reservoirs Due to Sedimentation”

Trapped sediment has robbed roughly 50,000 large dams worldwide of an estimated 13% to 19% of their combined original storage capacity, and total losses will reach 23% to 28% by 2050, UN research warns.
The global loss from original dam capacity foreseen by mid-century – from ~6,300 billion to ~4,650 billion m3 in 2050, a difference of ~1,650 billion m3 – roughly equals the annual water use of India, China, Indonesia, France and Canada combined.

The United Kingdom, Panama, Ireland, Japan and Seychelles will experience the highest water storage losses by 2050 – between 35% and 50% of their original capacities – the study shows. By contrast, Bhutan, Cambodia, Ethiopia, Guinea, and Niger will be the five least affected countries, losing less than 15% by mid-century.

“The decrease in available storage by 2050 in all countries and regions will challenge many aspects of national economies, including irrigation, power generation, and water supply,” says Dr. Duminda Perera, who co-authored the study with UNU-INWEH Director Vladimir Smakhtin and Spencer Williams of McGill University in Montreal. It is published by the journal Sustainability.

“The new dams under construction or planned will not offset storage losses to sedimentation. This paper sounds an alarm on a creeping global water challenge with potentially significant development implications.”

The researchers applied previously-established storage loss rates worldwide to a subset of nearly 60,000 dams in a database maintained by the International Commission on Large Dams (ICOLD). The subset comprises 47,403 large dams for which original storage capacity and year of construction are known: 28,045 in Asia-Pacific, 2,349 in Africa, 6,651 in Europe, and 10,358 in North, Central and South America.

Large dams and reservoirs – defined as higher than 15 m, or between 5 and 15 m high impounding over 3 million m3 – are essential in many places for hydroelectricity, flood control, irrigation, and drinking water.

River sediment accumulates behind a dam’s barrier. The problem, often ignored, has now become a significant challenge to global water storage infrastructure that must be addressed with a long-term sediment management strategy.
“Sedimentation is a serious issue that endangers the sustainability of future water supplies for many,” says Dr. Smakhtin.

Global average annual storage losses amount to approximately 0.36% of initial capacity, the UNU-INWEH study says, noting that figure may err on the conservative side. Previous attempts to estimate a global annual rate of loss from initial reservoir capacity generally agree on a range between 0.5% and 1%.

Many other studies suggest, however, that reservoir sedimentation rates and associated storage losses are site-specific and vary significantly between regions.

For example, other researchers have estimated the loss from 190 California reservoirs at more than 50% from their original capacities, with 120 reservoirs having lost over 75%. A similar study predicted Japan’s Sakuma reservoir will lose around 44% of its initial capacity by 2040.

Brazil, second after the USA in the Americas in number of large dams, will lose an estimated 23% of its initial storage of 600 billion m3 by 2050.

Among the 42 countries, 33 (~78%) will likely lose over 25% of initial storage by 2050 in part because of the dams’ age. Ireland can anticipate the greatest loss of storage by 2050 (39%), Denmark the least loss (20%). Turkey, Iceland, Hungary, and Cyprus appear to be Europe’s other least-impacted countries.

The Seychelles’ two dams have to date lost about 30% of their original 1 million m3 capacity and are projected to lose 50% by 2050 – the greatest loss of any country. Madagascar, DR Congo, Chad, and Zambia are projected to lose 30% by 2050, while another 11 countries will lose an estimated 25% to 30% by mid-century.

The lowest storage loss by 2050 is estimated for Niger (11%). Losses of less than 15% are foreseen for Sierra Leone, Congo, Ethiopia, and Guinea, mostly attributable to their relatively young dams.

A previous study noted that the Aswan Dam on the Nile River, with 99% of estimated trapping efficiency, has almost completely blocked sediment flow to the Nile River Delta.

Combined with those in Australia, and New Zealand, Asia’s 43 countries are home to 35,252 large dams, making it the world’s most heavily dammed region. The region is home to 60% of the world’s population and water storage is crucial for sustaining water and food security.

The loss of storage capacity of Japan’s 3,052 dams (average age: over 100 years) is the most acute in the region. Having already lost 39% of their total initial storage capacity, they will have lost nearly 50% by 2050 on average, and 67% in some cases.

In 2015, India’s Central Water Commission reported that among 141 large reservoirs over 50 years old, one-quarter had already lost at least 30% of their initial storage capacity. UNU-INWEH estimates that India’s 3,700 large dams will have lost on average 26% of their initial total storage by 2050.

China, meanwhile, the world’s most heavily dammed nation, has lost about 10% of its storage and will lose a further 10% by 2050.

* * * * *
Authors of the new paper note that their rough estimates could be greatly improved through consistent basin-wide monitoring of sediment transport and frequent bathymetry surveys of individual reservoirs.

Dredging can be costly, they add, and only temporary. Sediment flushing is more financially attractive but may have significant adverse impacts downstream.

Solutions such as bypass (or diversion) are gaining traction due to the growing public quest to minimize dams’ adverse environmental impacts. Bypassing is a technique that diverts the flow downstream via a separate channel to manage high-flow events during which sediment concentration is particularly high.

At their optimum operational levels, bypass tunnels can reduce sedimentation by 80%–90% as mentioned in a previous study.

Enhancement of the dam height is another alternative to recover the storage loss due to sedimentation. However, this should be executed only after a careful assessment of the dam’s structural strength.

Such an increase in height will also expand the reservoir area, potentially displacing communities and many species’ habitat.

Complete dam removal, including those filled with sediments, is a slowly emerging practice, returning rivers to their natural state and reestablishing natural river sediment transport. Treatment and disposal of accumulated sediments may be needed as they may contain heavy metals and other toxins.

“Clearly, this study’s results need to be interpreted by local authorities with consideration given to local specifics and factors,” says Dr. Perera.

“What is most important to underline is the disturbing overall magnitude of water storage losses due to sedimentation. This adds to the list of world water development issues we need to address with resolve.”

The UNU Institute for Water, Environment and Health is a member of the United Nations University family of organizations. It is the UN Think Tank on Water created by the UNU Governing Council in 1996.

Its mission is to help resolve pressing water challenges of concern to the UN, its Member States and their people, through knowledge- based synthesis of existing bodies of scientific discovery; cutting edge targeted research that identifies emerging policy issues; application of on-the-ground scalable solutions based on credible research; and relevant and targeted public outreach.

UNU-INWEH is hosted by the Government of Canada and McMaster University, Hamilton, Ontario.