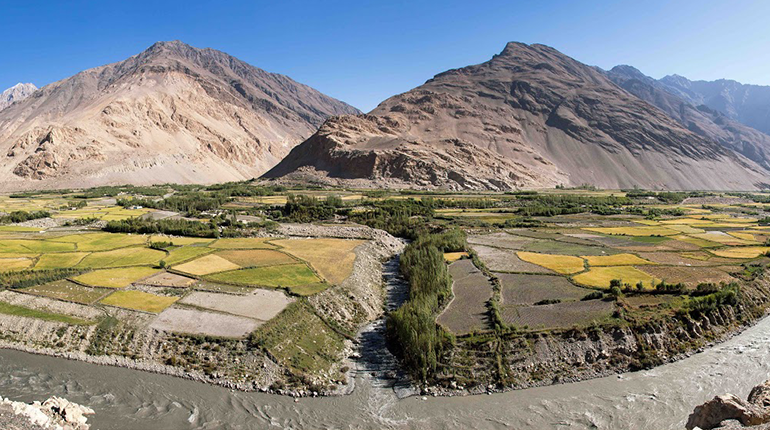 Unless well-funded and coordinated joint efforts are stepped up, ongoing over-withdrawals compounded by climate change will cause dangerous water shortages for some 70 million people living in Central Asia’s Aral Sea Basin, according to a new book co-authored by 57 experts from 14 countries and the United Nations.

With six countries competing for resources – Afghanistan, Kazakhstan, Kyrgyzstan, Tajikistan, Turkmenistan, Uzbekistan – the Basin is one of the world’s most complex watersheds.

Its two major rivers, the Amu Darya and Syr Darya, discharge now only about 10% of what flowed into the Aral Sea until the 1960s, shrinking the sea by more than 80 percent — “one of the world’s most severe and emblematic environmental disasters.” Comments lead book editor Dr. Stefanos Xenarios of Nazarbaev University, Kazakhstan and co-editor-in-chief of the Central Asian Journal of Water Research (CAJWR):
“This book assembles the views of nearly all major regional and international experts on the great challenges to be met in Aral Sea Basin. And almost half of the 57 authors are based in Central Asia, creating a unique blend of regional and international voices and expertise on the critical issues involved.”

“The Aral Sea Basin’s many water issues must be addressed by all states jointly or none will be fully resolved,” adds Dr. Xenarios. “The region already has national strategies developed with support from international organizations. But they have not yet been fully implemented. Water management in the Aral Sea Basin should link with general development strategies, including trade, tourism and transportation, enhancing solutions and cooperation”

Adds contributing author and book co-editor Dr. Iskandar Abdullaev, Deputy Director, CAREC Institute, China: “The authors of this book sound powerful alarms about ongoing soil erosion, climate change, and other major environmental threats in the Basin. They also offer succinct policy recommendations to reverse the situation and protect the livelihoods of all those who strongly depend on a reliable regional freshwater system.”

“The Aral Sea Basin has been greatly affected by major geo-political changes in the last 30 years that, on one hand, increased water challenges and, on the other, created new opportunities to resolve them.”

“Needed also is strong and continuous high-level political engagement in all Aral Sea Basin countries to better coordinate water management at national and transboundary levels, and technical and financial support of the relevant authorities and organizations”.

Dr. Smakhtin also serves as series editor of the Routledge publishers’ Earthscan Series on Major River Basins of the World, to which the Aral Sea Basin Book is the latest addition. Previously published volumes examined the Ganges, Zambezi, Nile and Volta river basins, with a volume on South America’s Parana River Basin scheduled for 2020.

The Aral Sea Basin, a primer

Two major rivers, the Amu Darya and Syr Darya, flow through six Central Asian countries before draining into the Aral Sea. The total basin area is over 1.7 million square kilometers – about half the size of India.

The rivers’ annual flow in the late 1950s was 115 cubic kilometers and the Aral Sea covered an area the size of Ireland, 68,000 square kilometers. With flows since diminished by 90 percent, the sea now covers just 17 percent of its original surface area.

The causes: Massive developments, primarily in the second half of the 20th Century, and the expansion of intensive and wasteful irrigated farming.

Until the conquest of Central Asia by Tsarist Russia, and the subsequent establishment of the Soviet Union, traditional farming practices were pursued in southern parts of the Basin, and nomadic pastoralism in the north. During the Soviet decades, land use in the Basin transformed fundamentally to commercial agriculture based on irrigated cotton monoculture.

The collapse of the Soviet Union and the emergence of independent countries in Central Asia led to a change from centralized to inter-state transboundary water management and cross-border competition.

Today the region’s water systems are in transition, a combination of modern and old infrastructure and facilities.

The Basin contains some of the largest, most complex water management infrastructure on Earth, including the world’s longest canal, the Kara Kum in Turkmenistan, and the Rogun dam, under construction in Tajikistan and soon to be the world’s highest reservoir.

Over 80 reservoirs in the Basin each have individual capacity of over 10 million cubic meters. In the Basin, hydro facilities collectively generate 36,097 MWh of power; at full capacity, the dams hold almost 58 cubic km of water – about half of the total flow of both rivers in late 1950s.

These developments reflect the needs of some of the world’s biggest water users, with regional mean annual withdrawals of 2,200 cubic meters per capita, nearly 90 percent of it used for irrigation.

About 70 million people rely on the Basin’s water resources, a population greater than that of Thailand, France, or South Africa.

Agriculture contributes from 10 to 45 percent of GDP in the six countries and employs 20 to 50 percent of the rural population.

And the rising needs of users, especially urban and agricultural, has driven a recent increase in groundwater withdrawals.

Learn more about the book here.

Jelle Beekma, water resources specialist and consultant with more than 30 years of experience

Abror Gafurov, hydrologist with a focus on water cycles in Central Asia

Murodbek Laldjebaev, Assistant Professor in Earth and Environmental Sciences, University of Central Asia’s (UCA) School of Arts and Sciences, and a Research Fellow at the UCA’s Mountain Societies Research Institute

The Zambezi River Basin: Water and sustainable development
The Zambezi is Africa’s fourth longest river, crossing or bordering Zambia, Angola, Namibia, Botswana, Zimbabwe and Mozambique. The river basin is widely recognised as one of the most important basins in southern Africa and is the focus of contested development, including water for hydropower and for agriculture and the environment. This book provides a thorough review of water and sustainable development in the Zambezi, in order to identify critical issues and propose constructive ways forward.
http://bit.ly/UNUZambezi

The Ganges River Basin: Status and Challenges in Water, Environment and Livelihoods
The Ganges is one of the most complex yet fascinating river systems in the world. The basin is characterized by a high degree of heterogeneity from climatic, hydrological, geomorphological, cultural, environmental and socio-economic perspectives. More than 500 million people are directly or indirectly dependent upon the Ganges River Basin, which spans China, Nepal, India and Bangladesh. While there are many books covering one aspect of the Ganges, ranging from hydrology to cultural significance, this book is unique in presenting a comprehensive inter-disciplinary overview of the key issues and challenges facing the region.
http://bit.ly/UNUGanges

The Volta River Basin: Water for Food, Economic Growth and Environment
The Volta is an important transboundary basin in West Africa that covers approximately 410,000 square kilometres across six countries: Benin, Burkina Faso, Côte d’Ivoire, Ghana, Mali and Togo. Its natural resources sustain the livelihoods of its population and contribute to economic development. This book provides a comprehensive, interdisciplinary review and assessment of the issues and challenges faced.
http://bit.ly/UNUVolta

The Nile River Basin: Water, Agriculture, Governance and Livelihoods
The Nile provides freshwater not only for domestic and industrial use, but also for irrigated agriculture, hydropower dams and the vast fisheries resource of the lakes of Central Africa. The Nile River Basin covers the whole Nile Basin and is based on the results of three major research projects supported by the Challenge Program on Water and Food (CPWF). It provides unique and up-to-date insights on agriculture, water resources, governance, poverty, productivity, upstream-downstream linkages, innovations, future plans and their implications.
http://bit.ly/2JgOAWe